Common Things In between Yoga & Islam

When yoga invented as a lifestyle ,neither Hinduism or Islam was practice. Although yoga can not be completely identified with Islam but the prayers in Islam have something with the physical exercise. And yoga is not a religion; yoga is not only attached to the Hindu religion but has a universal applicability. It helps one to follow one’s own religion better whatever that may be. It has certain specific affinities with Islam that make for an interesting study.Religion and religious practices have always played a very important role in the lives of human beings. Looking at the root benefits of both words, Islam and Yoga, there is quite a similarity. The word ‘Islam’ means ‘peace’ and ‘surrenders the will to god’. The word yoga is derived from Sanskrit root Yuzjir meaning “union or to join, merging of individual soul to universal soul”. Last Islam and Yoga are complimentary in achieving the goal of self realization.The asanas of patanjali yoga and postures in namaz/salat are observed to have common features.Namaz and yoga both generates inner energy, vitality and flexibility.

It goes without saying that both Islam and yoga require basic physical and moral cleanliness and purity(tah?rah, sauca) before performing their practices. The two differ in several respects, but one feature that is common to both is using water to rinse the breathing passages: a yoga kriya (cleansing practice) called jala neti consists of pouring water into one nostril so that it flows through the sinuses and out the other nostril. The Muslim when making wud?’ takes water up the nose and blows it out; this is called istinsh?’. Again, the Islamic version does not go as deep, being simplified to make it easily accessible to everyone.

One of the most obvious correspondences between Islam and hatha yoga is the resemblance of Sal?t/Namaz to the physical exercises of yoga asanas. The root meaning of the word sal?t is ‘to bend the lower back’, as in patanjali yoga; the Persians translated this concept with the word Namaz, from a verbal root meaning ‘to bow’, etymologically related to the Sanskrit word “Namaste”. Namaz is performed as par following timings, before sunrise (Fajar), after noon (zoher), between noon and sunset (asar), just before sunset (magrib) and before bedtime (Isha).Namaz divided in five small units takes only 50 minutes of a day, recharging mind, body and soul. The thousands of postures and variations known to patanjali yoga can be classified into a few basic types, including standing postures, spinal stretches, inverted postures, seated postures, and spinal twists. The genius of Islamic salat is to incorporate all of these in rudimentary form into a compact, flowing sequence, ensuring a thorough, all-round course of exercises for good health that is easy for everyone to practice.

A namazi stands erect after declaring his intension of namaz and raise the hands with open palms up to the ears saying “Allah -o-Akbar”. This is the first posture called “Quayam”.This position resembles “Tadasan” a yoga asan/posture. This posture is of about 40 seconds duration. This namaz posture gives benefits of Tadasan(Yoga asan/position).

This consists of bowing down,keeping the palms on knees with all the fingers apart, legs should be staright.The body should be bent at right angle from the waist. The words to be spoken in this position are also in admission of god’s greatness. The average time under this position is of about 12 seconds. This namaz posture gives benefits of quarter shirsasan/Semi pashchimotasana(Yoga asan/posture).

This consists of returning back to standing position. This posture held for about 6 seconds.

This consists of sitting erect; legs bent and heels touching the sides of the hips. This namaz posture gives benefits of Vajrasan (yoga asan/posture). This posture is held for about 6 seconds.

This position is same as 4 th position.

A session of yoga practice normally concludes, just before final relaxation, with a thorough twist of the whole spine (ardha matsyendr?sana) to the right and to the left. It helps to even out the spine from the other poses it has done and keep everything balanced. In much the same way, sal?t concludes with the prayer of peace (sal?m) said while turning the head to the right and then to the left. This namaz posture gives benefits of ardha matsyendr?sana(yoga asan/posture). 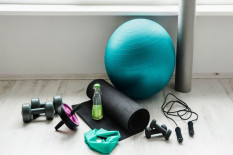